The Web 3.0 Myth and the Emergence of New Channels

In a scene from one of my favorite movies, the cult mockumentary, “Spinal Tap”, the lead guitarist proudly brags about his amplifier. “This one is the best gear, there is,” he says. “Why?” the off-camera voice asks. “Cause this one’s volume knob goes all the way to 11, see?”

The guitarist goes on to explain that on most amplifiers the volume control has only ten notches, while this one has 11.

When the WWW was invented, the first web pages were basic experimental pages of the “Hello World” variety. Soon pages began to sprout up with an informational focus—simple descriptions about the owner of the page with some images—to the point that by 1995, the vast majority of Web pages were the equivalent of the About Us section on most web sites.

Search engines and web indexers began to appear too. Soon, Web sites began to exhibit a measure of interactivity. Users were able to enter their information on forms and submit them to the web owner. The next logical step was transaction oriented services. This saw the emergence of travel reservation sites and the beginning of serious online commerce. The rest is more contemporary history. Someone came up with the brilliant marketing term “Web 2.0” to highlight the emergence of social networking sites. Not that Web 2.0 represented a true technological breakthrough. When you think about it, sites like Facebook and Linkedit are essentially template-driven, personal web pages that can get created and maintained without the user having to learn stuff like HTML or XML. So, in summary the progression of the Web has been as follows:

· First Wave: “Look at me.” In this wave the early adopters created quick pages by directly editing HTML files and entering fairly innocuous entries intended to establish a presence.

· Second Wave: “Let me Inform You.” Some advanced companies and most of academia published their web pages with descriptions and bibliographies intended to inform their readers. Around this time, the rush to grab domain names began.

· Third Wave: “Please tell me.” Forms began to be used for the purpose of asking the reader to enter his name and contact information or to provide comments for follow up.

· Fourth Wave: “Transact with me.” Some audacious companies began to expose their product inventory. The gradual adoption of the SSL (Secure Socket Layer) protocols combined with web encryption enabled people to trust the Internet as a carrier of credit card information.

· Fifth Wave (Web 2.0): Get Involved. Initially, sites facilitating the creation of Blogs made it easier for the more extroverted among us to begin publishing our tales without having to actually understand the technical elements of Web page construction. Sites like MySpace, Friendster, Linkedin, and Facebook took this paradigm further by creating communities that enabled people to expose their likes and dislikes, profiles, and comments in a structured fashion.

What will the next Web wave be then? The putative Web 3.0? I don’t believe so. There will not be a Web 3.0 anymore that there truly was a Web 2.0. However you care to define this eleventh notch for the Web, the fact is that the Web is in the process of becoming a hidden commodity, a utility like TCP/IP, the networking protocol used to power the Internet.

Just as the Cambrian era saw the rapid proliferation of diverse sea creatures undergoing an evolutionary frenzy, we are now witnessing the emergence of the “End Point as a Channel” phenomena. For example, until recently, making web content available to cellular phones used to be an after-thought. Nowadays, the popularity of smart-phones, whether iPhone, Android, Blackberry or Windows based, is making it obvious that these devices represent a brand new distribution channel. Where we once had Web pages we now have “Apps”. The burgeoning success of emerging Tablet devices will only shift this paradigm even more.

In a recent article, Tim Bernes-Lee, the inventor of the Web, expressed concerns that Facebook, iTunes and other social networking sites were counter-currents to the WWW, acting as walled-garden sites and ultimately running against the philosophy of openness and sharing that underpins the Web. True, the earlier AOL was a walled-gardened community that became obliterated by the emergence of the open worldwide web, but it now seems that we have come full circle. Closed communities are the “in” thing, and the Web is seen only as the common ground. You may even have noticed that some companies no longer put their web site URL in their advertisements, preferring to list their Facebook page instead. Still, this does not mean that the Web will go away; nor that email is likely to disappear, despite the recent claims that it is being used less and less due to the heightened use of internal messaging systems available on social sites. Instead, we should view the recent emergence of “Social Networking” sites and other content delivery mechanisms as the new apex in the IT services pyramid. 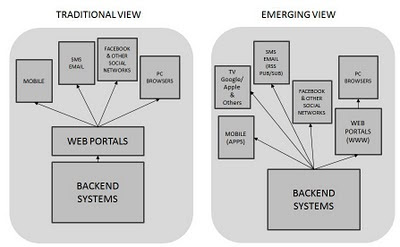 What does all this mean to you as a system architect? Well, basically it reinforces the importance of creating a layered services oriented architecture that allows you to support, with a minimum of effort, any channel the world throws at you. Aside from the presentation layer, you should avoid developing channel-specific components. Content Management, Merchandiser Engines, Security Servers, and all other backend infrastructure should be capable of operating on a channel-agnostic manner regardless. In addition, this new world reinforces the value of exposing the backend services via SOA and the importance of establishing the right infrastructure, capable of supporting a variety of SLAs and security modes at the boundary between the internal systems and the exploding channel zoo. Aren’t you glad to moved to transform your IT systems after all?
Posted by IT Transformation with SOA at 5:01 PM