The Advent of Social Sentience

Gutenberg had no idea that his printing press would result in the publishing of more than 120 million book titles. Watson’s steam engine led to an industrial revolution that has given us practically everything we define as civilization today, climate-changing carbon footprint included.  Add to this the advent of computers, and the more recent Internet explosion, and it’s not hard to conclude that every major human advance of the last centuries has been driven by a confluence of diverse factors combining in unexpected ways to create brand new technological and cultural spaces.  Version 1.0 of the Digital Age is so twentieth century when compared with how key developments for Platform, Access, and Information are now converging.   Enter the emerging field of Social Sentience. Platform is the result of the evolution of computer systems toward the concept of infrastructure-as-a-commodity. The system engineering techniques of virtualization, clustering, and abstraction of layered services now allow the sharing of gigantic Platform-as-a-Service (PaaS) computer system farms known as “the cloud”.
When it comes to access, the increased pervasiveness of mobility, network access, and continued   miniaturization and cost reductions as predicated by Moore’s Law are coalescing into the more recently hyped “Internet of Things”.  We should not be surprised to see more and more personal biometric devices and appliances seamlessly connecting people with computers. We are entering an era of pervasive access to information; an Infosphere, where ultimately we will remain connected at all times, and the devices used to connect will no longer need to be personal, but will instead be embedded in our environment.
The recent emergence of social media, along with the explosive online participation of over a billion people across the globe, has resulted in the creation of huge amounts of data. It is estimated that 2.5 Exabytes of data are generated everyday (you would need to buy one billion 1Gb thumb drives at Costco to get an Exabyte).   The potential value of mining this data has provided the economic justification to trigger advances in information and knowledge technologies: 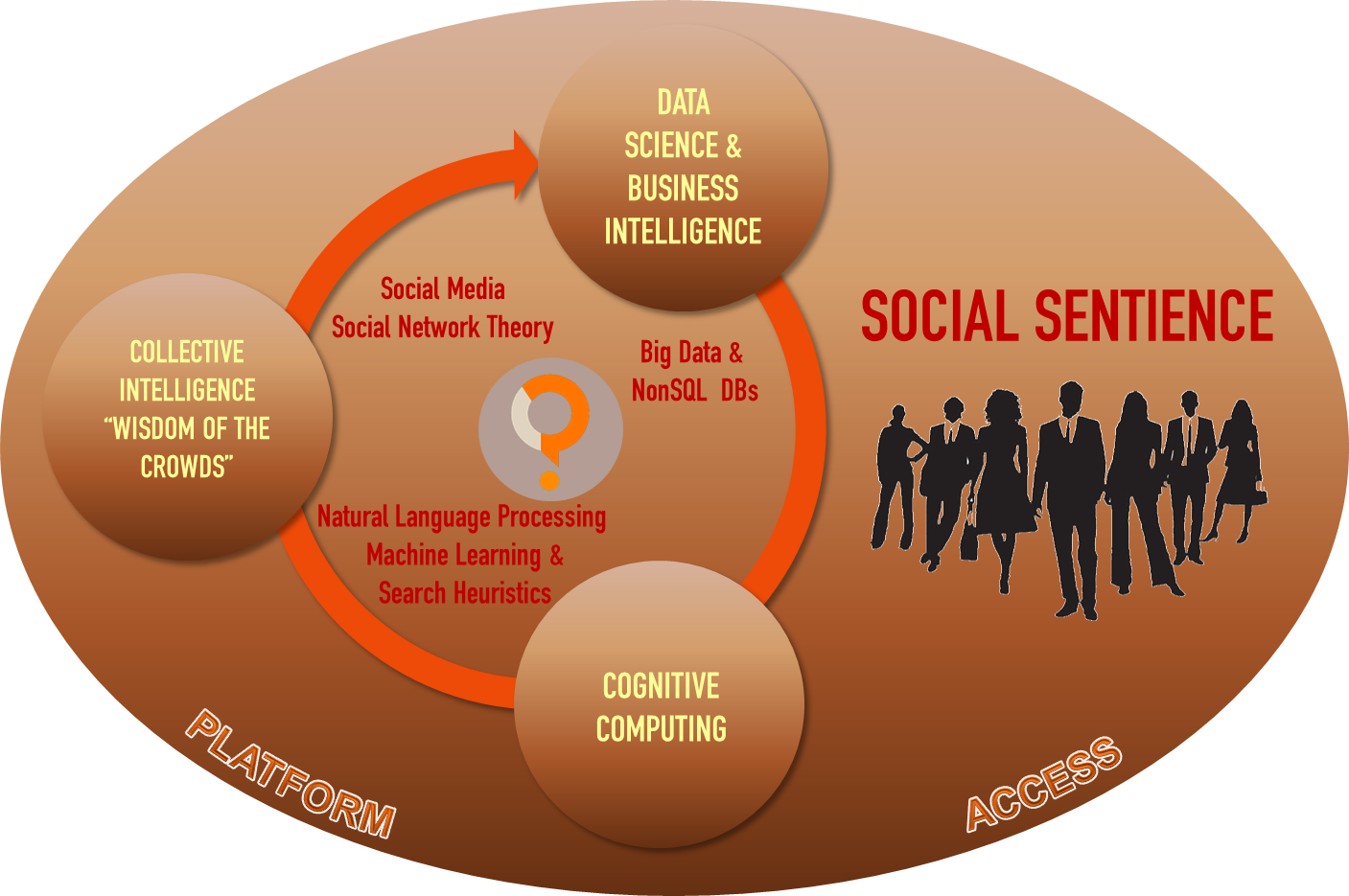 What is Social Sentience?  Well, the dictionary defines sentience as “responsive to or conscious of sense impressions” or as “finely sensitive in perception or feeling”. The convergence of all the previously mentioned advances will lead to a surrounding social environment that can become sentient in the truest form of these definitions. This Infosphere will automatically leverage all the above technologies to give you access to information and resources that represent the best summarization of the combined societal knowledge, but with a highly personalized interaction. Social Sentience will act as your very own personal advisor.
So, what would a Social Sentience engagement look like?  Today, when you get a recommendation from Netflix or Amazon, chances are that their algorithm bases its recommendation on your history or the history of people who have used similar products in the past. This is but a glimmer of things to come.
With Social Sentience, the “engine” will continuously monitor the environment around you—things like your location, the time of day, the current and forecasted weather, and your exercise level.  The engine will continuously match this environment to your known and inferred preferences and, depending on your choices, it will proactively provide you with advice and recommendations.
Imagine this scenario, you are walking the downtown and reach the proximity of a seafood restaurant that the Social Sentience engine discovers was visited by one of your Facebook friends (you respect this friend since you have “liked” most of her comments), and  who has entered a positive Yelp comment regarding the food.  Since it is lunchtime (in the near future, bio-sensors could track whether you are due for a meal), the engine will trigger a message pointing out the nearby restaurant.
Previously,  the engine first checked your food preferences—after all, if you don’t like fish, your friend’s recommendation will not matter—and also validated your appointments and credit card balance to ensure you have the time and the pockets to eat there.  The resulting experience, the quality of the recommendations and advice, as well as the timeliness and relevance, will be a quantum leap over what you are experiencing today.
In other words, Social Sentience will give you an array of offers, opportunities, and choices, which will be highly curated around your specific tastes and preferences (many of these inferred via machine learning algorithms), as well as taking into consideration the tastes and preferences of your social circle. This view will be contextual (are you on business or on vacation?) as well as appropriate to the time and circumstances.
As you can see, having a Social Sentience system that delivers these capabilities involves an integrated use of the three fundamental tracks I’ve mentioned.  I am not talking about more esoteric “artificial intelligence” topics, although a Social Sentience engine like the one described here may appear to be “intelligent”.


What lies on the horizon is not outside the realm of current technology. The actual challenges come from valid socio-political and cultural concerns.  Things could get Orwellian very quickly. How can we ensure that this type of service does not transgress upon well-established privacy expectations?  And then there is certainly the question of safe-guarding what’s being tracked, as well as the wealth of information mined from your behaviors and consumer patterns.  Clearly, protections against security breaches by hackers and others will also be a major issue. It must be said that most of these issues are already surfacing in light of how Google, Facebook, and other social media sites are gathering tons of data about you even as we speak. My own view is that the ultimate solution will have to come with actual legislation that takes into account the current world we live in by delivering us a much-needed Digital Bill of Rights.  Perhaps as we finally elect more and more technological-savvy representatives, this will come to pass.
Posted by IT Transformation with SOA at 10:35 AM